NASA announced Tuesday that its Double Asteroid Redirection Test (DART) mission successfully altered the orbit of an asteroid millions of miles away.

Following analysis over the past two weeks since the spacecraft struck Dimorphos – the first time humanity purposefully changed the motion of a celestial object and the first full-scale demonstration of asteroid deflection tech – scientists found that the kinetic impact had shortened the moonlet's orbit around its parent asteroid Didymos by 32 minutes.

Before, Dimorphos took 11 hours and 55 minutes to orbit Didymos.

The measure has a margin of uncertainty of approximately plus or minus two minutes. 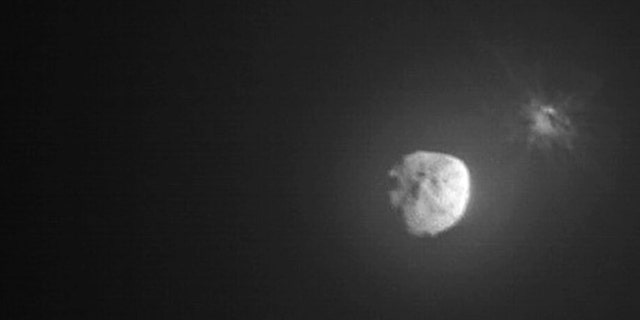 In this image made available by NASA, debris ejects from the asteroid Dimorphos, right, a few minutes after the intentional collision of NASA’s Double Asteroid Redirection Test mission on Sept. 26, 2022, captured by the nearby Italian Space Agency’s LICIACube. On Tuesday, Oct. 5, 2022l, NASA said the spacecraft succeeded in shifting its orbit.  (ASI/NASA via AP)

Astronomers used telescopes to measure how much the time had changed and, before its encounter, the agency had defined a minimum successful orbit period of change of Dimorphos as 73 seconds or more.

NASA said the focus is now turning toward measuring the efficiency of momentum transfer from DART’s roughly 14,000-mile-per-hour collision, including further analysis of the "ejecta."

Astronomers will continue to study imagery of Dimorphos to approximate the asteroid's mass and shape and, in around four years, the European Space Agency’s Hera project is also planning to conduct detailed surveys of both Dimorphos and Didymos. 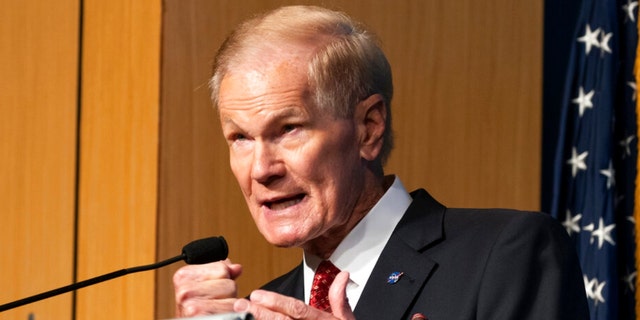 NASA administrator Bill Nelson, speaks during a media briefing about the agency's recently completed Double Asteroid Redirection Test, at NASA headquarters Tuesday, Oct. 11, 2022, in Washington. The DART mission saw the spacecraft collide with the asteroid Dimorphos in an attempt to test whether the resulting kinetic force could redirect an asteroid's course to protect Earth against potential impacts.  (AP Photo/Alex Brandon)

Neither Dimorphos nor Didymos poses any hazard to Earth after DART’s controlled collision with Dimorphos.

"All of us have a responsibility to protect our home planet. After all, it’s the only one we have," NASA Administrator Bill Nelson said in a statement. "This mission shows that NASA is trying to be ready for whatever the universe throws at us. NASA has proven we are serious as a defender of the planet. This is a watershed moment for planetary defense and all of humanity, demonstrating commitment from NASA's exceptional team and partners from around the world." 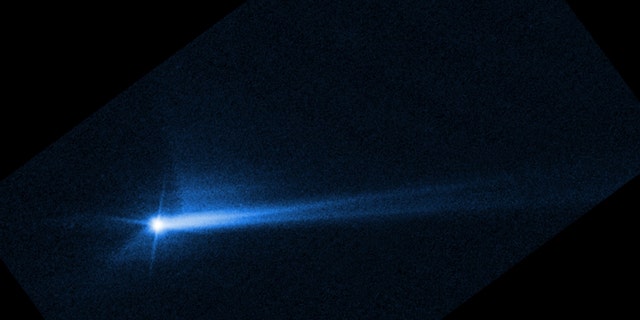 This imagery from NASA’s Hubble Space Telescope from Oct. 8, 2022, shows the debris blasted from the surface of Dimorphos 285 hours after the asteroid was intentionally impacted by NASA’s DART spacecraft on Sept. 26. The shape of that tail has changed over time. Scientists are continuing to study this material and how it moves in space, in order to better understand the asteroid. (Credits: NASA/ESA/STScI/Hubble)