It certainly didn't start off well for the Philadelphia Phillies, but double-digit runs will cure just about anything.

The Phillies are now one win away from winning the National League pennant after their 10-6 win over the  in Game 4 of the NLCS.

The Phillies made it a bullpen game, and Bailey Falter retired the first two guys he faced. But Manny Machado launched a solo home run to left-center to put the Padres up early. But the Padres kept it coming – the next two Padres got on base, and Brandon Drury drove them both in with a double. Rob Thomson yanked Falter, but Ha-Seong Kim had an RBI single off Connor Brogdon to put San Diego up 4-0. 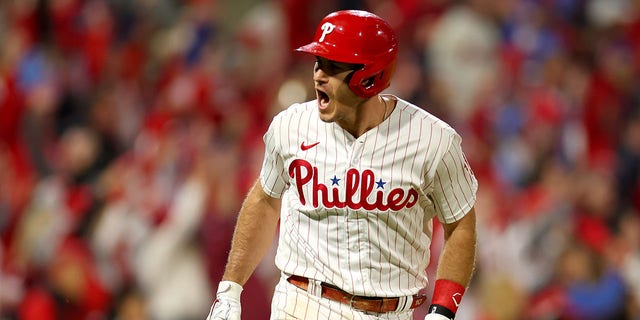 J.T. Realmuto #10 of the Philadelphia Phillies reacts after his solo home run during the seventh inning against the San Diego Padres in game four of the National League Championship Series at Citizens Bank Park on October 22, 2022 in Philadelphia, Pennsylvania. (Mike Ehrmann/Getty Images)

But the Phillies answered back immediately. After Kyle Schwarber led off the bottom half of the inning with a single, Rhys Hoskins belted a two-run homer to cut the deficit in half. J.T. Realmuto then walked, and he scored all the way from first on Bryce Harper’s double. Neither pitcher record three outs – in fact, Padres’ Mike Clevinger didn’t record one. 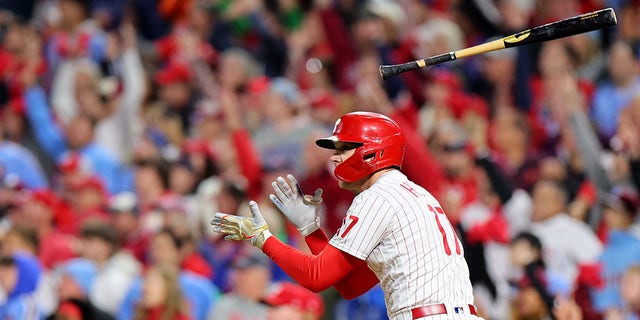 Rhys Hoskins #17 of the Philadelphia Phillies reacts after his two-run home run against the San Diego Padres during the fifth inning in game four of the National League Championship Series at Citizens Bank Park on October 22, 2022 in Philadelphia, Pennsylvania. (Michael Reaves/Getty Images)

The second and third innings were silent, but the Phillies put the tying run on base in the fourth with a leadoff double from Nick Castellanos, and Bryson Stott drove him in with a single.

In the fifth, Juan Soto put San Diego back in front of a two-run homer, but Hoskins answered right back with his second two-run homer of the night, tying the game up at six. In fact, the bottom of the fifth was almost a carbon copy of the bottom of the first. Realmuto again scored from first on a Harper double, this one giving the Phillies their first lead of the night. Castellanos then drove Harper in with a single up the middle. In the sixth, Schwarber hit a solo home run, making it a 9-6 Phillies lead, and Realmuto joined the fun with a solo homer of his own in the seventh.

Phillies relievers - in this case, non-starters - combined for 8.1 innings of two-run ball, with those runs only coming on Soto's homer. They allowed just five hits and struck out eight while walking one. 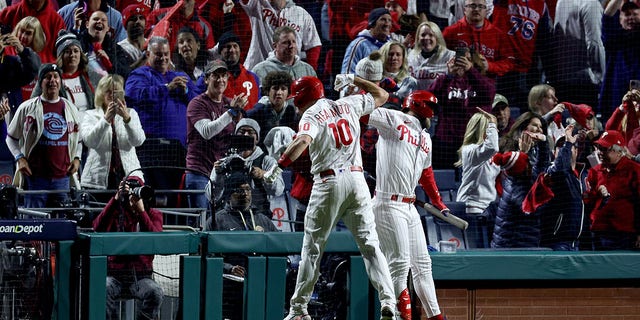 J.T. Realmuto #10 and Bryce Harper #3 of the Philadelphia Phillies celebrate a solo home run by Realmuto during the seventh inning of Padres in game four of the National League Championship Series at Citizens Bank Park on October 22, 2022 in Philadelphia, Pennsylvania. (Tim Nwachukwu/Getty Images)

Zack Wheeler tossed a gem in Game 1, and he'll look to do the same in Game 5 on Sunday afternoon to send the Phillies to their first Fall Classic since 2009. Yu Darvish will look to send the series back to San Diego.