Dozens of missiles were fired across Ukraine Saturday morning, causing power outages all over the country as Russian forces continue to pound the war-torn nation from the sky.

Nearly 1.5 million people across Ukraine were left without electricity following the strikes Saturday, reported Kyrylo Tymoshenko, Deputy Head of the Office of the President of Ukraine, in a Telegram post.

The Ukrainian Air Force said it had been able to destroy 18 of the 33 cruise missiles that rained down on critical infrastructure in at least five regions across the country.

Another 10 Iranian-gifted Shahed drones have been shot down by Ukrainian forces over the southern Mykolaiv region since Friday. 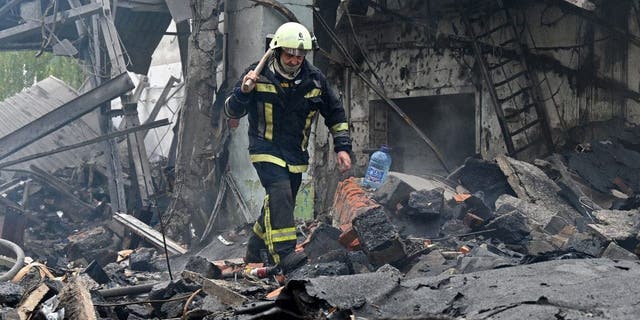 A firefighter walks among the ruins of a destroyed electrical products plant following missile strikes in Kharkiv on October 4, 2022, amid the Russian invasion of Ukraine.  (Photo by SERGEY BOBOK/AFP via Getty Images)

Governors across western and central Ukraine said energy facilities had been targeted in the massive missile strike. Ukrainians in cities like Kyiv and Dnipro bunkered down amid hours-long air raids and power outages.

The attacks also reportedly shut down water supplies in several of the regions.

Ukraine’s national grid operator Ukrenergo said the attacks had largely targeted the main networks in western Ukraine, but that power had been restricted in 10 regions across the country as a precautionary measure.

"The consumer restrictions are necessary to reduce the load on the networks and avoid repeated accidents after the power grids were damaged by terrorist missile attacks," the agency said in a message posted to Telegram.

Ukrenergo has urged Ukrainian citizens to avoid using electricity as much as possible, particularly during peak hours to preserve resources.

Russia has increasingly relied on air strikes as its forces have faltered on the front lines, and since Oct. 10 at least half of Ukraine’s thermal power generation and more than 30 percent of its energy infrastructure has been shut down, according to Ukrainian President Volodymyr Zelenskyy. 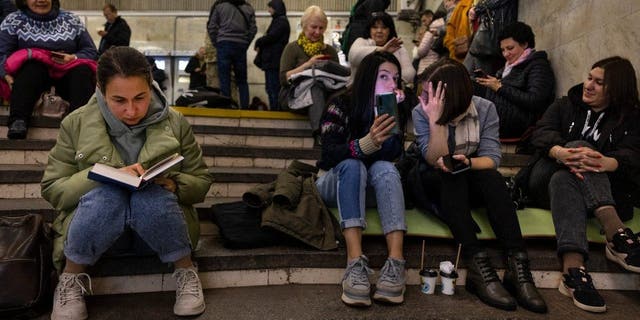 Residents of Kyiv wait in an underground metro station during a two-hour air alarm on Oct. 20, 2022, in Kyiv, Ukraine. (Paula Bronstein/Getty Images)

"These are vile strikes on critical objects. Typical tactics of terrorists," Zelenskyy said in a Telegram post Saturday. "The world can and must stop this terror."

Kyiv and Western officials have long warned that Russia will target the energy systems ahead of the winter months as Russian forces stall in eastern and southern Ukraine.

Details surrounding the "air shield" remain unclear, and Washington has not yet committed to assisting Ukraine with creating a system that could be similar to Israel’s "Iron Dome."

White House national security spokesperson John Kirby told reporters this week that he could not comment on what the Department of Defense was considering in the way of air defense for Ukraine, but said that it was "looking actively" at potential solutions.

The Pentagon on Friday also announced that it would be supplying Ukrainian forces with cold-weather gear as the nation prepares for a tough winter ahead. 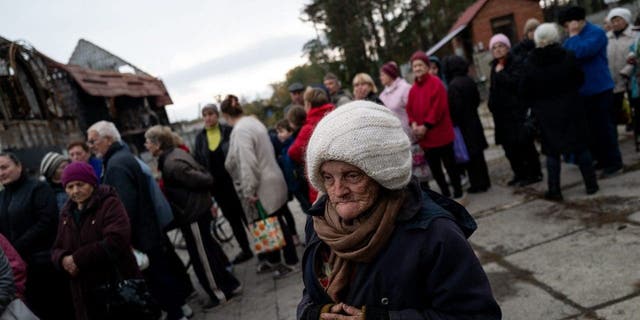 Ukrainian civilians queue for humanitarian aid provided by the Red Cross as people try to survive amid the wave of Russia's missile strikes in Sviatohiersk, Donetsk Oblast, Ukraine on Oct. 20, 2022.  (Wolfgang Schwan/Anadolu Agency via Getty Images)

"In addition to this recent U.S. commitment, eight allies and partners announced new donations of cold-weather gear at the most recent Ukraine Defense Contact Group hosted by Secretary Austin on October 12," she said. "This includes a sizable Canadian commitment of hats, gloves, boots and parkas valued at $15 million."

Liz Friden is a Pentagon producer based in Washington, D.C.