Russia orders evacuations in Kherson ahead of major Ukrainian counteroffensive

Russia-appointed officials in the city of Kherson on Saturday ordered all citizens to evacuate as Ukrainian forces prepare for what is expected to be a major counteroffensive in the southern region.

"Civilians of Kherson and all departments and ministries of civil administration must now cross over to the left bank of the Dnieper [River]," Russian authorities from Kherson said in a Telegram message.

The order was made "due to the tense situation at the front, the increased danger of massive shelling of the city and the threat of terrorist attacks," it added in reference to approaching Ukrainian forces. 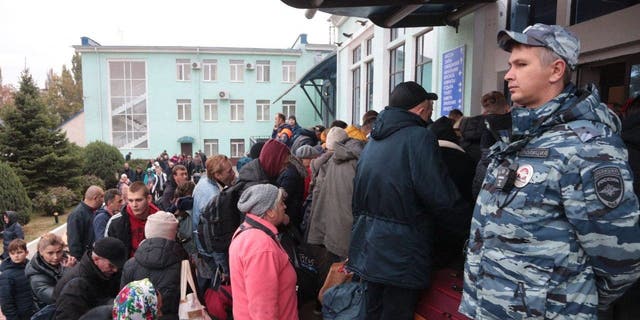 People arrived from Kherson wait for further evacuation into the depths of Russia at the Dzhankoi's railway station in Crimea on Oct. 21, 2022. (STRINGER/AFP via Getty Images)

The statement told civilians to bring pets, valuables and documentation as they flee what many believe will be the next major front in Ukraine’s fight to regain its territory.

Intense fighting has ensued in the region for months, but as Ukrainian troops look oust occupying forces from the regional capital there is a growing sense the battle there is reaching critical juncture.

Russia was able to take Kherson without devastating it and has held the city since Feb. 24.

But Ukrainian advances and an information blackout in the region suggests Ukraine could be planning another major counter-offensive like the significant advancements it made in Kharkiv last month, which put Russian soldiers on the retreat.

Russia-installed officials in Kherson said this week that they were planning to move 10,000 people a day from Kherson across the Dnieper River and urged them to evacuate to Russia, Reuters reported. 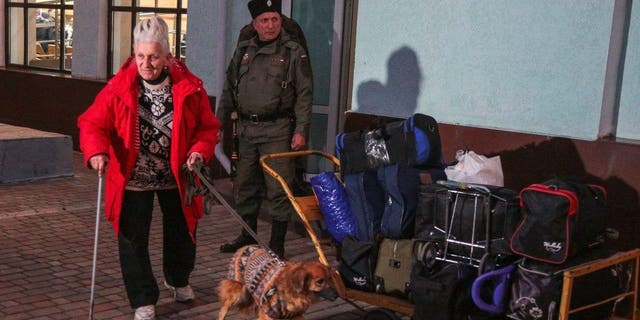 A woman arrived from Kherson leads her dog along a platform for further evacuation into the depths of Russia at the Dzhankoi's railway station in Crimea on Oct. 21, 2022.  (STRINGER/AFP via Getty Images)

RUSSIA TO EVACUATE TOP SECURITY OFFICERS AND THEIR FAMILIES FROM OCCUPIED REGIONS IN UKRAINE: REPORT

Ukrainian forces have been targeting bridges, thoroughfares and supply routes that connect Russian troops in Kherson to vital access points in eastern Ukraine and Crimea.

Russian General Sergei Surovikin said this week that the situation in Kherson was "already difficult" and Russia was "not ruling out difficult decisions" there, reported Reuters.

Russia’s defense ministry on Saturday said it had repelled a counter-offensive along the front lines in southern Ukraine, but Fox News Digital could not independently verify these claims. 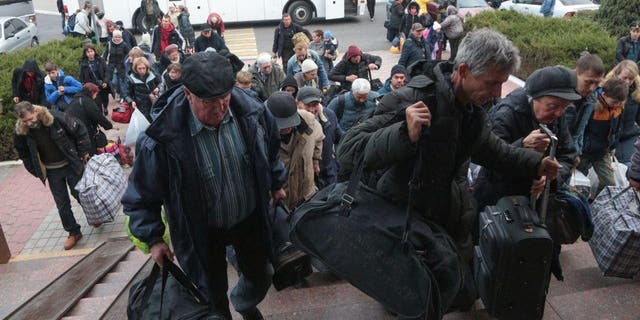 People arrived from Kherson hold their bags as they wait for further evacuation into the depths of Russia at the Dzhankoi's railway station in Crimea on Oct. 21, 2022.  (STRINGER/AFP via Getty Images)

Russia has declared that the Kherson region is now its territory following its attempt to annex it last month.

Ukraine and Western allies have dismissed this as an illegal land grab.

'A serious failure to meet ministerial standards': What was ...

Tyre Nichols: What is the 'Scorpion' unit of Memphis police?...

40 dead in Pakistan after bus falls into ravine

Wales rugby boss resigns after claims of racism, sexism and ...