Adrian Kwiatkowski, 23, of Ipswich in southern England, hacked the artists’ cloud-based accounts and sold their songs on the dark web in exchange for cryptocurrency. City of London Police, which investigated the case, said Kwiatkowski made $147,000 on the transactions.

"Kwiatkowski had complete disregard for the musicians’ creativity and hard work producing original songs and the subsequent loss of earnings,’’ said Joanne Jakymec of the Crown Prosecution Service. "He selfishly stole their music to make money for himself."

In August, Kwiatkowski pleaded guilty to a variety of charges, including 14 copyright offenses and three counts of computer misuse. He was sentenced Friday in Ipswich Crown Court. 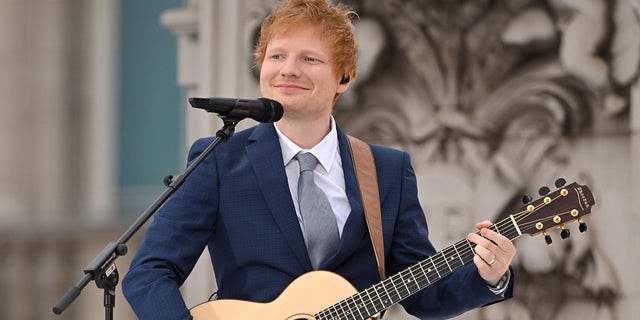 Ed Sheeran performed outside of Buckingham Palace on the final day of Platinum Jubilee for Queen Elizabeth. Sheeran had unreleased songs stolen by a U.K. computer hacker. (Karwai Tang)

City of London Police worked with authorities in the United States to investigate the case after the management companies of several musicians reported that an individual, known online as Spirdark, had gained access to their clients’ cloud-based accounts and was selling their content.

The Manhattan District Attorney’s Office launched an investigation in 2019, and linked the email address used for Spirdark’s cryptocurrency account to Kwiatkowski. It then identified the IP address of the device used to hack one of the accounts as his home address.

After further investigation, Kwiatkowski was arrested by the City of London Police’s Intellectual Property Crime Unit in September 2019.

"Cybercrime knows no borders, and this individual executed a complex scheme to steal unreleased music in order to line his own pockets,’’ Manhattan District Attorney Alvin L Bragg Jr said.

'A serious failure to meet ministerial standards': What was ...

Tyre Nichols: What is the 'Scorpion' unit of Memphis police?...

40 dead in Pakistan after bus falls into ravine

Wales rugby boss resigns after claims of racism, sexism and ...