The James Webb Space Telescope has done it again, releasing another stunning image of the iconic Pillars of Creation.

In the center, the three-dimensional pillars are made up of cool interstellar gas and dust, appearing semi-transparent in near-infrared light.

The pillars were first made famous in 1995, thanks to images from NASA's Hubble Space Telescope. 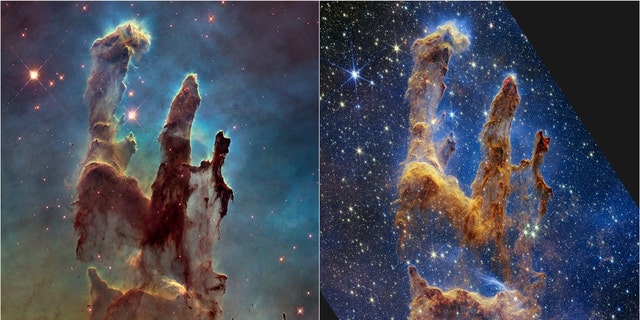 NASA's Hubble Space Telescope made the Pillars of Creation famous with its first image in 1995, but revisited the scene in 2014 to reveal a sharper, wider view in visible light, shown above at left. A new, near-infrared-light view from NASA’s James Webb Space Telescope, at right, helps us peer through more of the dust in this star-forming region. The thick, dusty brown pillars are no longer as opaque and many more red stars that are still forming come into view. (Credits: NASA, ESA, CSA, STScI; Joseph DePasquale (STScI), Anton M. Koekemoer (STScI), Alyssa Pagan (STScI).)

NASA said researchers would begin to build a clearer understanding of how stars form over millions of years. 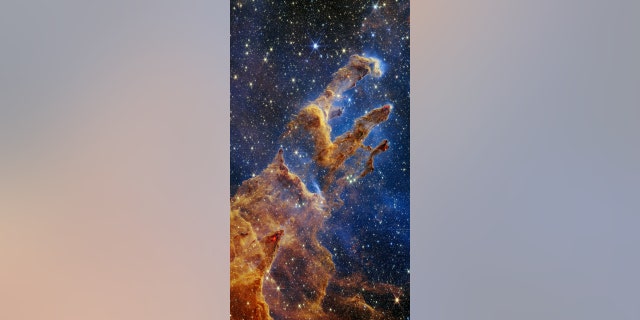 The Pillars of Creation are set off in a kaleidoscope of color in NASA’s James Webb Space Telescope’s near-infrared-light view. The pillars look like arches and spires rising out of a desert landscape, but are filled with semi-transparent gas and dust, and ever-changing. This is a region where young stars are forming – or have barely burst from their dusty cocoons as they continue to form. (Credits: NASA, ESA, CSA, STScI; Joseph DePasquale (STScI), Anton M. Koekemoer (STScI), Alyssa Pagan (STScI).)

Knots inside the pillars collapse under their own gravity, heating up and forming stars.

ASTRONOMERS ARE SHOCKED WHEN BLACK HOLE 'BURPS' OUT A STAR

In addition, the lava-like edges of the Pillars of Creation are ejections from the stars that are still forming, with supersonic jets colliding with clouds sometimes resulting in bow shocks that can form wavy patterns.

The red glow comes from the resulting energetic hydrogen molecules. 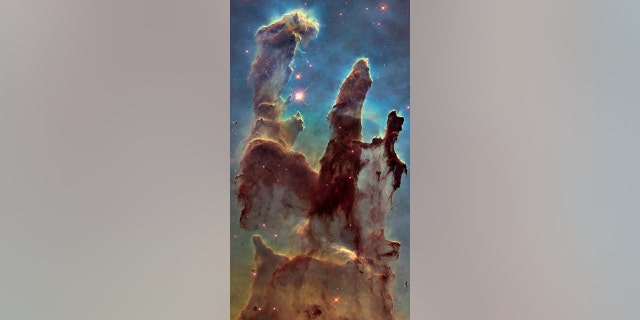 NASA's Hubble Space Telescope has revisited the famous Pillars of Creation, revealing a sharper and wider view of the structures in this visible-light image. Astronomers combined several Hubble exposures to assemble the wider view. The towering pillars are about 5 light-years tall. The dark, finger-like feature at bottom right may be a smaller version of the giant pillars. The new image was taken with Hubble's versatile and sharp-eyed Wide Field Camera 3. The pillars are bathed in the blistering ultraviolet light from a grouping of young, massive stars located off the top of the image. Streamers of gas can be seen bleeding off the pillars as the intense radiation heats and evaporates it into space. Denser regions of the pillars are shadowing material beneath them from the powerful radiation. Stars are being born deep inside the pillars, which are made of cold hydrogen gas laced with dust. The pillars are part of a small region of the Eagle Nebula, a vast star-forming region 6,500 light-years from Earth. The colors in the image highlight emission from several chemical elements. Oxygen emission is blue, sulfur is orange, and hydrogen and nitrogen are green. (Credits: NASA, ESA and the Hubble Heritage Team (STScI/AURA))

The new stars seen in this image are estimated to be only a few hundred thousand years old.

There are no galaxies seen here, because the interstellar medium blocks the deeper universe.

This scene was initially revisited by Hubble in 2014.